Trivia question: How do you say "Timmermann's Griddle" in Swedish?

Free trivia: The Danish province of Greenland is almost completely covered by a snow-white ice cap. So why is the island named so colorfully? Is it because the natives all wear A's caps? Contrary to popular belief, no, it is not. The name derives from the color your face turns when you eat contaminated chicken while flying above it.

Here's a travel tip: try to avoid contracting food poisoning on long, intercontinental flights. You may not have known this, but there are many better ways to begin your vacation. Like, say, doing anything else.

More trivia: A list of people poisoned in or above or on their way to Denmark:

No wonder Danes are the happiest people on earth. They could be poisoned at any moment. When you start with such low expectations, anything else is a happy surprise. I survived my Danish poisoning! Life is great!

As for our Greenland Athletics, until my actual encounter with Greenland, I was pretty happy. Perhaps because, like the Danes, I came into this season with incredibly low expectations. I expected disaster, and instead, it's been kinda not bad. Look, the A's are pretty much having the same season as the Yankees, likely to finish above .500 but out of the playoffs, but the Yankee fans are much more miserable about it.

Then I met Greenland, puked on the plane, landed in Copenhagen, barely missed a train to my Swedish destination while my stomach gurgled, finally arrived my brother's home, where I promptly puked a bunch more. I thought, well, this vacation can't get much worse than this. What's worse than being poisoned? I couldn't eat for two days. Shortly after I had regained my strength, Rich Harden was traded for much less in return than I had been expecting, and I felt miserable again. Then a couple days after that, my baby daughter got sick with fever, and cried inconsolably for hours and hours until she finally fell asleep and the fever broke the next day. And to top things off, a few days later, my 17-year-old nephew went out to a party at a friend's house, and as he left the party, he was robbed, kidnapped and driven to multiple ATMs and made to drain his account, and then beaten up and left on the street with a shiner, a broken nose, and a concussion. (Yes, this happened in Sweden.) But hey, other than those things, it's been a wunnerful, wunnerful show.

Tomorrow, I depart Sweden for New York City, where the weather forecast calls for muggy, 95 degree East Coast heat all weekend long. We're scheduled to see Justin Duchscherer pitch on Sunday in my first and only visit to Yankee Stadium, so the odds are good I'll at least witness a competitive game. But then again, given my recent fortunes, Duchscherer will be traded or injured before then, and/or the game will be cancelled on account of thunderstorms or some other random act of God. That is, of course, assuming I even survive the flight out of Stockholm. Perhaps I should reaquaint myself with some August Strindberg scripts before I order my in-flight meals.

My expectations right now are about as low as they can be. If the A's go on a 15-game losing streak out of the all-star break, for example, I won't be heartbroken; I'm fully expecting such misery. And if anything uncatastrophic happens, I am pleasantly and happily surprised, such as this afternoon when I discovered to my great joy the answer to the above trivia question: 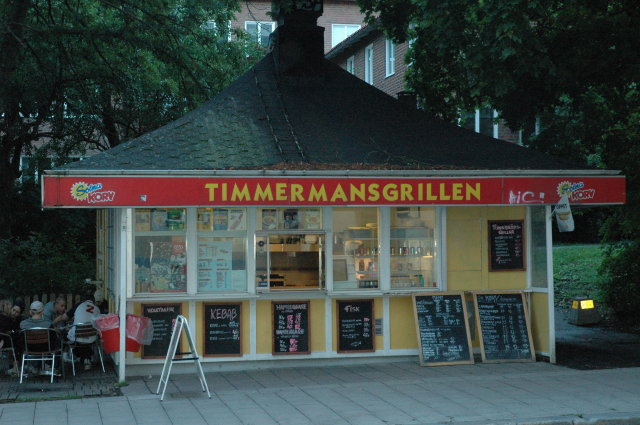 Cardenas is the jewel of the group. A's all of a sudden have a glut of middle infielders.

2.   jwb
Sorry about all the bad things that have happened (so far) on your vacation. Cool picture, though.

The Greenland/Iceland thing was strictly PR: "Don't go to Iceland! Brr! Cold and icy all year! Go to Greenland! Spring 12 months a year! Bring lots of food so you don't starve that first spring-like October to June time, though."