I feel about FanFests the way I feel about trade conferences: you spend all day at the thing, and if you're lucky, you find one or two useful pieces of information. Are those one or two things worth a day of your life? I'm never quite sure. 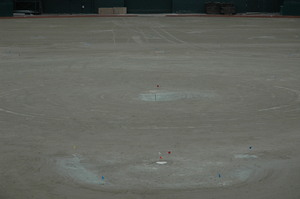 I spent five and a half hours today at the Coliseum today, and came out with about five minutes worth of interesting stuff. I keep thinking there could be a more efficient use of my time, but for some reason, I keep going. At least the entrance fee is free, with my season ticket package. Plus, it provides a nice little emotional baseball fix in the middle of winter, if nothing else. Or so I tell myself.

I think the emotional fix would have been stronger if I had walked into the Coliseum today and seen a plush green field under a bright blue sky. Unfortunately, the grass had been completely removed. There was only drab gray dirt under a drab gray sky. Baseball still seemed to be deep in hibernation.

On the bright (or at least less drab) side, I had actually never seen the field completely bare like this, so I was provided with a new experience, even if it wasn't exactly a beautiful one. 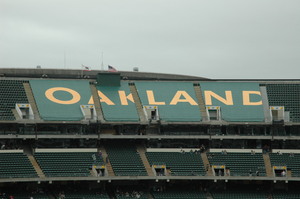 Another new experience was seeing some tarp installed over the third deck sections behind home plate. I wonder, are they going to install tarp over the whole third deck, or just those four sections? I hope it won't just be like this. The tarp layout looked off-center: they covered one middle section, one section on the first base side, and two sections on the third base side. Those of us who have even some minor Adrian Monk tendencies will be left haunted by the unevenness.

You'd have to fiddle with the fences, and there's only about three feet of wiggle room in the corners, but the position of the outfield fences is already arbitrary.

I used to always enjoy the Billy Beane Q&A sessions, but my interest is starting to wane. I've seen his act enough now to know pretty much what he (isn't) going to say. This year was particularly uninteresting, because he didn't have to defend any controversial moves.

And yet...there was one new tidbit he dropped, almost in passing. He claimed that young players usually play quite inconsistently until sometime midway through their second season (Huston Street being a rare exception). He fully expects Nick Swisher and Dan Johnson to struggle at times in the first half of the year, and then sometime around midseason, things should start to click for them.

I'd never heard of that one-and-a-half-year rule of thumb before. I wonder if that idea is merely observational on Beane's part, or if he has some statistics backing that idea. 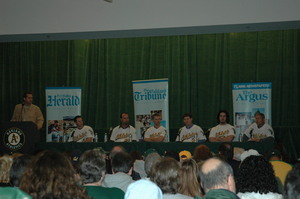 The player Q&A sessions never really teach you anything about the game itself, but sometimes it can be fun to learn a little bit about the clubhouse chemistry. For example, who knew that Dan Haren was such a tease? Or that Kirk Saarloos is quite the wit? I had always imagined Frank Thomas as rather surly, but he seemed downright jovial in his Q&A session. Esteban Loaiza, who played with Thomas in Chicago, called Thomas "a big man, but a big teddy bear". Those were the most interesting words out of Loaiza's mouth, as otherwise he was a fountain of baseball cliches.

Which brings us to the second interesting point of the day: that Thomas and Loaiza each said that they chose to sign with Oakland because they wanted to play for a winner. Normally, those are words reserved for teams like the Yankees and Red Sox--I can't ever recall anyone saying it about the A's before. Usually, the A's get free agents who are just happy to have a job. The A's have reached a new level of respect within baseball. If done right, it could be the start of a virtuous cycle: good players want to play for you, which makes you a good team, which makes more good players want to play for you.

In the afternoon, I eschewed the crowded player Q&As, and attended some more intimate seminars with A's coaches. There were a couple of "Baseball 101" sessions that dealt with how hitters and pitchers use video to maintain their mechanics and prepare for their opponents. Hitting coach Gerald Perry and catcher Adam Melhuse spoke about hitters, while pitching coach Curt Young and bullpen catcher Brandon Buckley talked about pitchers.

It was the combination of these two separate sessions that led to the third interesting thing I learned today: there is a sort of unspoken Hippocratic Oath that (A's) coaches follow: first, do no harm.

So there is a very real risk that by talking to a player about his mechanics, you can actually make things worse, because you can turn a subconscious act into a conscious one, and interrupt the automatic mechanism that brought them the success to reach this level.

Gerald Perry and Curt Young each spoke independently about not telling their pupils everything they notice. They choose what they talk to players about with great care. If they make a suggestion, they make sure to keep it a small and simple one, so that their conscious mind doesn't have too much information to hold. If you give a batter three different things to think about, by the time he thinks about those things, a fastball has gone right past him.

Earlier in the day, Dennis Eckersley was asked in a Q&A session why he was not a coach. Eck replied that it takes a special kind of person to coach, someone with a passion for it, and someone with patience. Eckersley admitted he did not have the patience to be an effective coach.

Coaching involves understanding technique, tactics, and psychology. You may see something that needs fixing, but you need the patience and understanding to know when and how to try to fix it, and when not to. Coaching is a delicate craft, and I don't think I fully appreciated that until today.

Comments
1.   Ken Arneson
To answer one question: tarps will cover the whole upper deck, according to today's SF Chronicle.

2.   Jwtf
Article in the SF Chronicle said the tarps cost $400k and A's president Crowley said they could have advertising though right now:

Behind the plate, the tarps will have this message, in gold lettering: HOME OF THE OAKLAND ATHLETICS. The years of the four Oakland World Series titles will be listed above the right-field corner, and the five championship years of the old Philadelphia A's will be seen above the left-field corner.

3.   Aaron in RF
I sure hope they have the rest of the A, K, & D somewhere...between the tarp and the denuded field the Coli had a weird feel to it. Thanks for the color; I didn't stay there anywhere near 5 hours and now I've got the scoop anyhow.

4.   The Real Neal
Wouldn't moving Home Plate back only make you closer to the action if you're sitting behind home plate? Admittedly, I've only been to The Coliseum once.

5.   Ken Arneson
Have you seen how much foul territory there is in Oakland, Neal? If you're sitting behind first or third base, you're a long ways away from the action. Moving home plate back would move the baselines closer to the stands.

6.   Lefty
I posted this in a previous thread where it didn't really belong. Earlier this month I was under Curt Young's tutelage at a baseball instructional camp. He was outstanding to work with. And the way you described it is exactly right. To correct an obvious inefficiency in my delivery we just threw the ball (Curt carried around a lefty catcher's mitt). The mechanics came around once I was throwing the ball with the proper authority.

Someone asked Young for some tips on teaching a kid how to pitch. He said to get some masking tape, make a strike zone on a wall, and throw a tennis ball against it until you can throw a strike every time. If you can do that, your mechanics are probably fine.

8.   scareduck
Re Eck's comments, I seem to remember Vic Braden in his numerous tennis videos he hawked back in the 80's that it is often the case that those who are good at doing something often do not have the patience to teach others how to do it, because they simply are capable of picking it up. I seem to recall Jackie Robinson asking someone in the Dodger heirarchy -- O'Malley, Branch Rickey, I'm not sure who -- about whether they thought Robinson would be a good manager. The answer came back "no" for the reason that Robinson would expect everyone to play the way he did... and if you could field a team of nine Jackie Robinsons, they wouldn't need a manager. But then he asked whether Campy could do it, and they said, "yes", and that satisfied him.

9.   Ken Arneson
One of the things that came up a couple of times in these video sessions as well is that sometimes you think you're doing something wrong but the video shows you're actually not. For example, you may feel like your hands are too low, but actually your hands are fine, it's your front shoulder that's in the wrong place.