Went to the A's-Angels game today. The A's lost by one run. Here's the run the A's were missing, off a drive that was crushed by Milton Bradley: 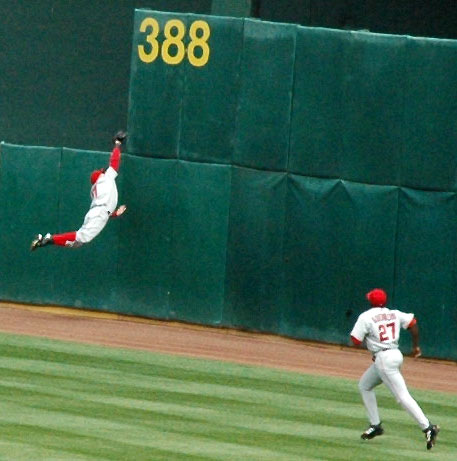 2.   photogirl
Send that to the Chronicle. I don't think any of the field photographers has an angle on that. That's one of those "lucky" shots.

3.   Cliff Corcoran
I dunno about "lucky," Ken always seems to get the perfect action shot. It happens too often for it not to be skill.

I'm equally amazed that the Angels burried Ersdat at first base for two years. Pure idiocy.

4.   Ken Arneson
Well, considering that my intent when I snapped this photo was to take a picture of the ball going over the fence, I'd say this picture was an utter failure.

As far as my skill goes, let's just say that a good camera goes a long way...

5.   chuie
After last year's score-on-the-throw-back-to-the-mound and last night's end-the-game-on-an-interference-double-play, I expected Kendall to hit his first home run with Oakland. Lucky for Angels fans, Frank Thomas came in to take a walk. (Of course, maybe Kendall's only going to turn in one freak play a year and the HR won't come until next season.)

6.   Vishal
the thing that strikes me about that picture, almost as much as the impressive catch, is vlad guerrero's physique. good lord, what an imposing figure.

Where he won two Gold Gloves while the Angels won two Division titles.

8.   Ken Arneson
He would have won two Gold Gloves in centerfield, too.

Playing Erstad at first is like having Olivier in your cast of Hamlet, and having him play Guildenstern. Sure, he makes a helluva Guildenstern, but c'mon.

9.   chuie
Yeah, it just opens a can of worms because you'd have to try to get John Gielgud to play Rosencrantz.

10.   TheRedMenace
8 - Erstad was moved from centerfield because he had signifigant problems with both his hamstrings and his knees. These problems are exacerbated by the fact that the effort you see in that shot is the norm from our favorite ex-punter.

Not to mention the fact that if you look at the 2004 team, Erstad was clearly the fourth best outfielder on the squad and just as clearly the best first baseman they had. Oh, and with respect to "pure idiocy," a much better example is the signing of Esteban Loaiza.

12.   Ken Arneson
10 I'm not going defend Cliff's "pure idiocy" statement. In fact, using the words "moron" and "idiot" is probably my biggest pet peeve on the Internet. I find those two five-letter words more offensive than a lot of four-letter words I know.

So, Cliff and TheRedMenace, you are both hereby on the Catfish Stew "On Notice" list for use of offensive language. Please behave yourselves in the future, lest you be demoted further to the "Dead to Catfish Stew" list. ;)

So I don't think it was idiocy, but even though I understand why the Angels did what they did, I do think the Angels could have found more creative and effective solutions than the one they ended up choosing.

That's because words cannot express how much I respect and admire Darin Erstad's play in centerfield. Hence the title. I believe he's one of the all-time defensive greats at a very important position on the field.

I remember all those AL West games in the early 2000s with Erstad and Mike Cameron roaming centerfield at the Coliseum against the A's, and feeling like it was practically impossible to hit a double to the gap.