You never know the meaning of a moment. On June 17, 2007, with two outs and Aaron Miles on first base in the top of the fifth inning of a baseball game between the St. Louis Cardinals and the Oakland Athletics, Cardinals catcher Gary Bennett grounded out to the A's second baseman Mark Ellis to end a scoreless inning.

Fame. It’s an embarrassing thing to talk about, for all that it is a national/global obsession. It is one of the few apparently desirable human qualities that … no, what am I talking about … it is not a quality. It is not like courage, mercy, kindness, strength, beauty or patience; or laziness, dishonesty, greed or cruelty for that matter. What is different about fame, I was going to say, is that it is so contingent. If you are tolerant or strong or wise, you are tolerant and strong and wise wherever you are on the planet that day. You don’t become bigoted, feeble and dim-witted the moment you cross a continent. Famous people however, can become entirely unknown the second they leave their homeland.

Fame exists as memories in the minds of others, not as a quality inherent in those endowed with fame. All I really know about Joe Kennedy is his modest amounts of fame, and the events he is modestly famous for: he played baseball for my favorite team during the last three seasons.

I have, in my mind, strong feelings and opinions about his famous feats. I never quite understood, for example, why the A's yanked Kennedy from the rotation in July. Here are the earned run totals Kennedy allowed in his sixteen 2007 starts: 1,1,1,1,1,3,1,3,7,1,2,4,3,5,2,4. The last start was only 2/3 of an inning, but besides that game and the 7-run game against Baltimore in the middle, none of those starts were disastrous, and most of them were pretty good. The fact that he was 2-7 in those sixteen starts wasn't really his fault. Obviously, the last half of those stats don't look as good as the first half, but when you allow 2 or fewer runs in eight of sixteen MLB starts, you probably deserve to have (a) a winning record instead of a losing one, and (b) a job.

But none of those things are really qualities of Joe Kennedy. Joe Kennedy, I presume, had Thanksgiving dinner with his wife and child and other friends and family last night, in some place where he was not a famous baseball player, but had crossed that continent to become a human being who was kind or patient or dim-witted or funny or lazy or whatever true qualities made Joe Kennedy be Joe Kennedy. I, as a distant observer, know nothing of those qualities. I have not personally lost them. 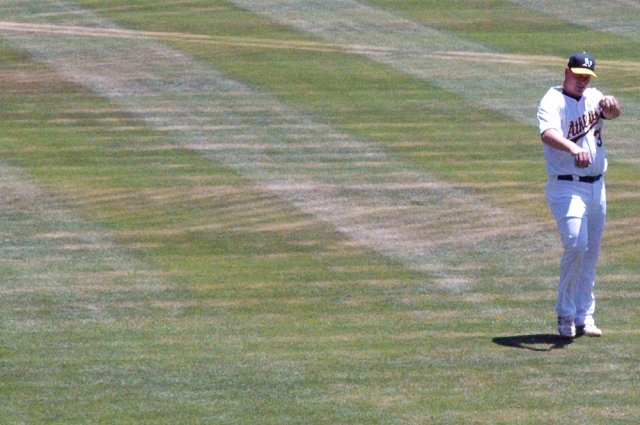 And yet, like those who did know him, I feel compelled to mourn. What am I mourning, exactly? Perhaps an idea: we may live in the present and point towards the future, but we all, like Joe Kennedy, could find ourselves at any moment in a moment where all our moments and the qualities we fill them with are behind us. As long as we are alive, our qualities exist within us. When we go, our qualities last only as long as our fame: as memories in the minds of the people we touch. I mourn to keep Joe Kennedy alive, just a little bit longer, in hopes that others, someday, may do the same for me.

Comments
1.   walbers
Beautiful....
i still mourn my lovely daughter...gone these past 13 years at age 3 and a half (anniversary in 9 days) for the very same reasons.
rgds
will

2.   BigShmirdawg
Very devastating news for MLB and especially the Kennedy family. My heart goes out to his wife and young son.

5.   Bluebleeder87
You blow my mind some times Ken Arneson, wow.

7.   68elcamino427
Thanks, Ken. I miss my dad, but somehow he is still here, in some unique things that I see my kids do and in other ways. I just wish that I could talk to him.

8.   Chyll Will
Beautiful, Ken. This time of year always seems to bring forth memories of ourselves and those who have passed or come into our lives, especially at a moment when you want them to be there and they're not. But it is important to remember, or else you lose a part of yourself that you may need long before you know it.

Peace be with you, Joe Kennedy and your family.