My family vacation to San Diego coincided with a Padres road trip, so we missed Petco Park. But no matter. We went out Saturday evening and checked out some Surf Dawgs, instead.

The San Diego Surf Dawgs are one of eight teams in the Golden Baseball League, a brand new independent league centered on the west coast. The league began play on Thursday, so the game we attended on Saturday was the third game ever for the Surf Dawgs and their opponents, the Long Beach Armada. The Surf Dawgs and their main attraction, Rickey Henderson (more about him later), play at Tony Gwynn Stadium on the campus of San Diego State University. 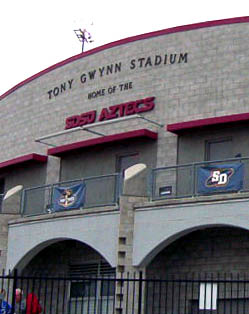 Home of the Surf Dawgs

The ballpark seats about 3,000 people, all on the infield. It was about half-full on Saturday evening, and from listening to the people in the crowd, it seemed like half of the people in the stands were related to somebody on the field. "The pitcher is my cousin." "My dad's the bullpen catcher." "C'mon son!" 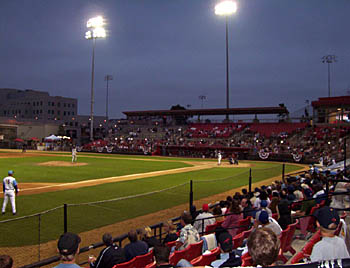 I doubt catering to the relatives of ballplayers is a sustainable business model, but if the league fails, it won't be for a lack of marketing. In fact, I think they pulled out the table of contents in the Baseball Marketing 101 textbook and used it as a checklist.

Checklist item #1: give something away as people enter the stadium. We each got a T-shirt commemorating the inaugural weekend of Golden League play. The gift was a good way to get on our good side right away.

Checklist item #2: give some more things away after that. Just minutes after we settled down in our seats, a Surf Dawg employee came by and told us that our row had been selected for an upgrade to a luxury box. Free catered food! 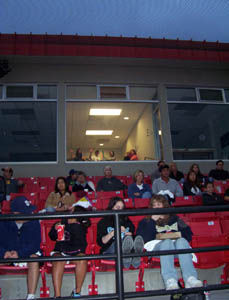 In an interview with Christian Ruzich, Dave Kaval, a founder of the Golden League, explained their marketing strategy:


We're targeting families. We're very, very focused on the typical four-person family: wife, husband, the two kids. We're going to cater to families with the types of promotions we do — from having the kids run the bases between innings to having a kid zone in all of our parks, with everything from speed pitch to one of those big Scooby-Doo blow up things for the kids to jump around in. Just making sure that the lowest common denominator is entertaining the children.

He wasn't kidding about the kids. They had a kid zone with all sorts of games. They had both a Surf Dawg mascot (named Southpaw) and a clown who made beaut animals. My kids got their faces painted. And between every half-inning, there was some entertainment happening on the field, from a frisbee-catching dog to a burrito-catching contest. 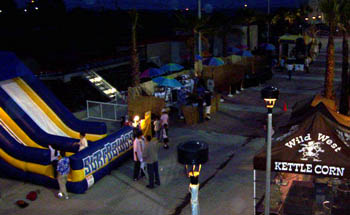 The marketing plan worked to perfection on my wife and kids. Everyone on the staff was friendly and approachable. They seemed to genuinely care to make sure we were having fun. My kids had a great time, and were never bored at all. My wife absolutely loved it. We have a trip planned to L.A. later this year, and as soon as we got home, she checked out the schedules online to see if we could make another Golden League game. In fact, I'd bet if there were a Golden League team in the Bay Area next year, she'd want to dump our A's season tickets and go there instead. (Memo to the marketing departments of MLB and the Oakland A's: we're people, not ATMs.)

I, on the other hand, am more of a hard-core baseball fan, and I'm not going to fall for any marketing magic unless the product on the field is worth watching. The defense was not crisp, and none of the pitchers I saw had great stuff, but at least they threw a lot of strikes and made the batters put the ball in play, which made for an entertaining home team victory, if not an impressive one.

And yet, even for me, the night was magical.

When the game was over, I felt like I had stepped out of a scene in Field of Dreams. Ray Kinsella had come into my office and asked me if I could have one wish, what it would be? And I responded, "Just once, I'd like to see Rickey Henderson young again, driving the opposing team absolutely insane, working the count, taking walks, hitting homers, and running wild on the bases. That's my wish, Ray Kinsella. That's my wish." 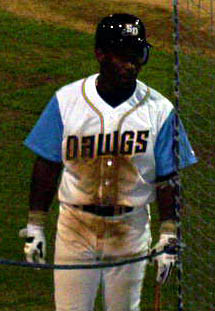 And so it was. 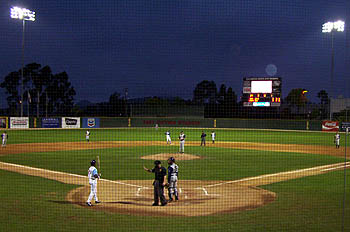 Both times, Rickey stepped up to the plate... 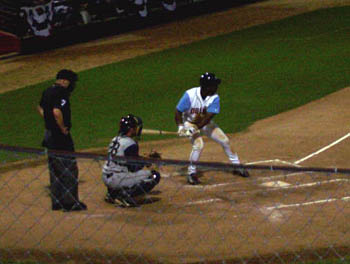 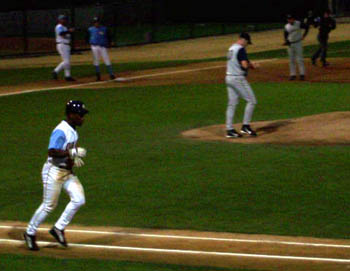 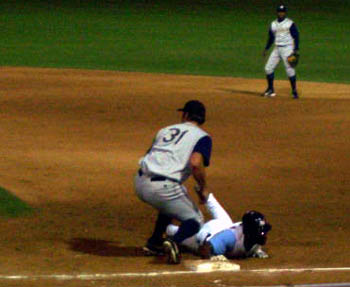 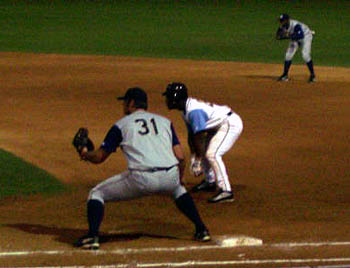 The throws over helped Rickey study his moves to first and to the plate.

As soon as he was sure he had the pitcher's moves down, Rickey stole second base. He was stranded at second in the first inning, but in the third inning, Rickey scored as part of a five-run rally. I think Rickey was messing up the pitcher's concentration. 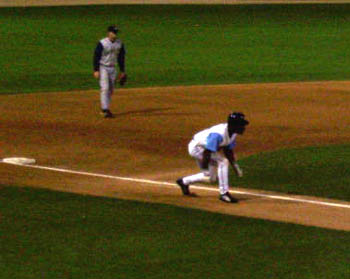 Rickey fakes a steal of home.

Next time Rickey was up, the pitcher fell behind 1-0, and decided he didn't want to walk Rickey again, so he threw him a fastball down the middle. It was just like old times: the pitcher is damned if he does, and damned if he doesn't. Rickey deposited the generous pitch over the fence in straightaway left field. 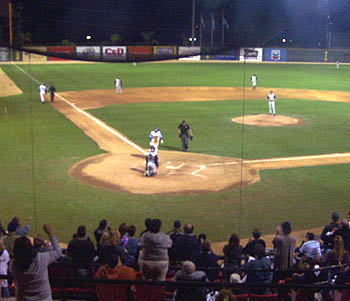 It was the first home run in Surf Dawg history.

Rickey was out on a sharp grounder to third his next time up. Then in the eighth inning, he walked again against a new reliever. The 2-1 pitch was pretty close to Rickey's head. Rickey seemed annoyed, so I definitely thought he would try to steal again. 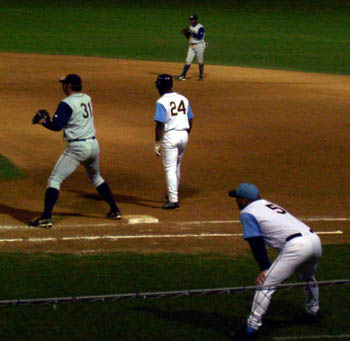 Rickey sized up his move... 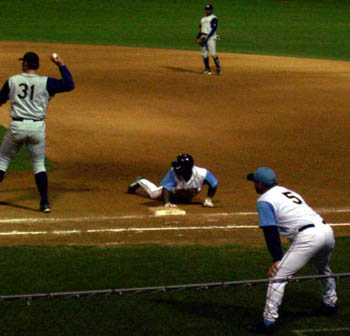 ...and the pitcher promptly balked.

Long Beach manager Darrell Evans ran out of the dugout and argued with the umpire for about five minutes. When play resumed, Rickey quickly tried to steal third. 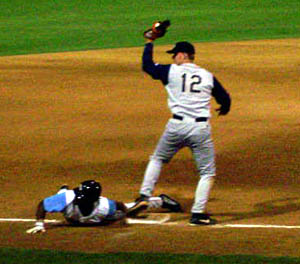 He was called out. 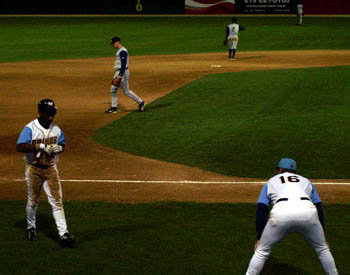 Rickey didn't argue, he just shook his head and walked off the field.

Reality had set in. Rickey was just a step too slow to beat that short throw to third. He was replaced for defense (his age showed most in the field) in the ninth. Was that slow walk to the dugout the last time I'll ever see Rickey Henderson on a baseball field?

As Rickey, caught stealing, walked off the field, I thought about Archie Graham.

He was once a kid, living his dream on a baseball field, full of potential, capable of anything. But eventually, real life forced him across that foul line. Now, he was merely a respected old man, toting a satchel full of memories.

Comments
1.   Eric Enders
I really have nothing to say other than this was a very entertaining post.

5.   Bob Timmermann
But if Rickey is Archie Graham, I hope he can help do the Heimlich on any little girl choking on a hot dog.

6.   CoreyJ
Awesome post. One of the best articles I've read on a baseball blog in a long while.

7.   whitestag
Amazing!!! Years ago that big guy (#31) on first was going to the Oakland A's games to watch Ricky and boys do there thing, or riding his BMX bike down the street to watch Ricky and Dave Stewart cruising by as they enjoy thier time off the field, and me spending thoughs big bucks so the kid can have Ricky's rookie card...now look, he is standing right next to him on first base or even better, swiping him out!!! I'am getting kick out of this!!!!

8.   THEDOC
Hi,
I actually play for the Long Beach Armada of the GBL (the opposing team you saw the Surf Dawgs play that night), and I have a couple of comments. I'm glad you enjoyed the game and that there was a nice family environment, but I would like to give you a better insight into Indy ball.
You say the defense wasn't crisp, and that you didn't see any pitchers with great stuff, but what you don't see is the stories that go along with almost all of these players. There is a reason most of these guys aren't currently in affiliated ball, and that reason is almost never based on skill. We have a pitcher who was in the big leagues in 2002, but missed the last two seasons with ulcerative collitis and was released without trhowing another big league pitch. Another player was stabbed in the head during an attempted robbery. This was only 4 weeks before our spring training, but he is out there every night trying to prove his baseball skills to fans that only come out for the cheap beer, and the chance to heckle the players all night long with cheap shots about how they aren't anything compared to "real" ball players. There are 3 other guys on our team that were high round draft picks, but have had their careers derailed by injuries. Everyone has a story. I had a pituitary tumor that set me back, and have since had to try and prove myself to fans that think the hot dogs are cheap and the dizzy bat race is funny, but these guys suck. It's hard to tune it out sometimes, but you just have to remempber that most of the people booing and heckling haven't picked up a baseball since junior high. I guess my point is that there is not a huge difference between independent ball and affiliated ball. Just a few bad breaks. You can go to big league games and see great baseball. There is no doubt that those guys are superior, but if you go to an independent league game, try to remember that each of these guys has a story and is playing for $1,000 a month because they love the game. Sure there are errors, and there are rarely guys that blow 95+ gas, but there is a lot more heart. The GBL is substance free, seven figure signing bonus free, pure baseball. Go talk to the guys before the game. They'll talk to you. Bring your kid to get an autograph. They'll sign for you. And as for Rickey, you're damn right it's a pleasure to play against a Hall of Famer. Hell, I sturck him out, and I'll never forget that.