My five-year-old daughter decided early in the season that Jason Kendall was her favorite player. I'm not quite sure why, but she kept telling everyone who would listen that Kendall is "fast for a catcher." That piece of trivia really fascinated her, for some reason.

She didn't get her cues about her favorite player from me. Kendall has probably been my least favorite A's player this year. All those weak grounders to third and one-hop throws to second have really grated on me. Early in the season, I blurted out in my daughter's presence that Kendall was a "double play machine", and I still feel bad about it.

Home-made Jason Kendall jersey, made with a roll of paper, some tape, and a pen: priceless. 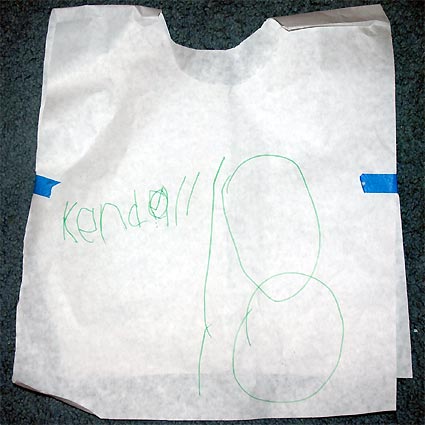 How many things in life are better than helping your kid become a baseball fan?

Very few, so I better not blow it. It's not right for a kid to have a favorite player, to decide on her own to replicate a jersey, and then later find out that her dad thinks that player sucks. I need to learn to love Jason Kendall.

I've been trying to appreciate what Kendall can do well--get on base, call a game, and make good decisions--and accept his weak arm and powerless swing. But it isn't easy to turn a reasonable argument into an emotional reality.

That's where a play like today's game winning run helps. Kendall's been in the center of the two most memorable plays of this magical season, the tag of Soriano at home in Texas, and today's mad dash home off Francisco Rodriguez. They were both unlikely, game winning plays where Kendall's instinctive, quick-thinking and aggressive style won a game for the A's.

That's something I can appreciate. Hey, maybe that kid's OK.

Comments
1.   Kenny
Did your daughter try to spell "Kendall" as "Ken-doll?"

2.   Joe
Great post. I can't wait to have my own kids and experience and cherish what you have.

Oh, and I'm in the market for a Chavez jersey if your daughter is up to the challenge. :-)

Dude, you should be ashamed of yourself. At the tender age of 5, your daughter is WAY more insightful about about baseball, the A's, and Jason Kendall, than you are.

I hate to sound like I'm preaching, but don't worry about what you think Kendall can or cannot do - appreciate the fact that your daughter has a favorite player and seems to be a true fan of the game. Maybe she will grow up to be MLB's first female catcher.

I consider myself to be a true fan as well, and I can appreciate the fact that I never heard my father blurt out that Reggie Jackson was a strikeout machine when I was a 5 year old, even though it may have been painfully true.

That jersey is just about the coolest thing I've ever seen, this side of my obsolete Tim Hudson #15 T-shirt. Your daugher is my hero - can I buy that thing? If I had a daughter and she made something like that, I would proudly wear it to tomorrow night's A's game.

5.   Jack
Great post. Not to nit-pick but it was Michael Young in the play at the plate in TX...Jack