Had an interesting experience at the ballpark today--it felt more like watching a game in Little League instead of Major League Baseball. Not because the play was bad, but because I happened to sit next to the aunt of Orioles' starting pitcher Jeremy Guthrie. That's her boy right here: 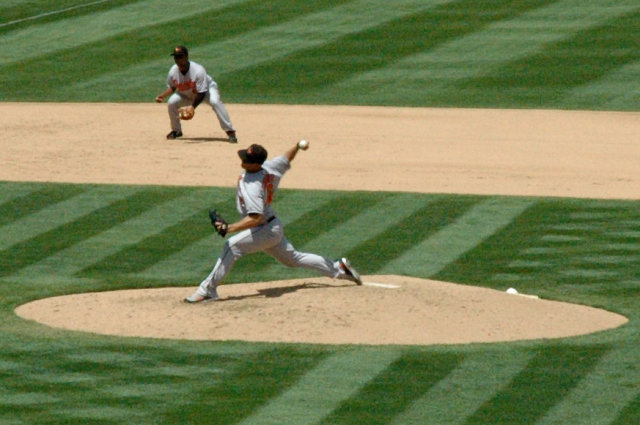 Guthrie's aunt was one of those kindly old ladies who loves you no matter what, and everything you do is great, because you're trying your best. Her cheering, complete with anachronistic shouts of "Yay!" and "Yahoo!" and "Hooray!", was so charmingly optimistic--"C'mon Jer, you can do it, I know you can!", I began to fall under her spell. After about three or four innings, I had somehow come to believe that the worst possible outcome of this game would not be a loss for either team, but that Jeremy Guthrie might somehow end up with his feelings hurt.

So when Kurt Suzuki blasted this two-run homer, I didn't really have the heart to cheer very much: 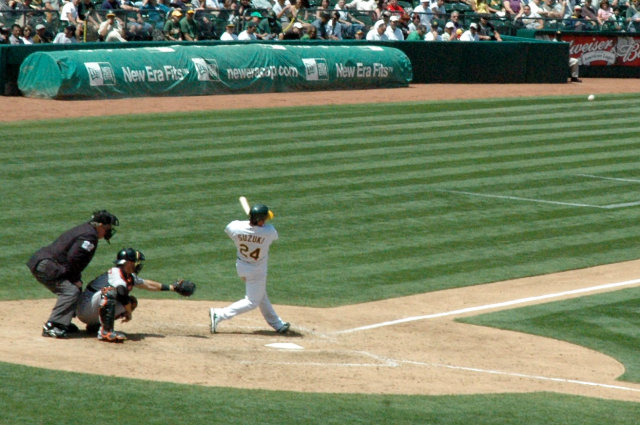 Poor Jer. He must have felt so bad. Guthrie was on the hook for the loss until Andrew Brown entered the game in the eighth inning, and proceeded to give up twenty-nine consecutive grounders in the hole between Daric Barton and Mark Ellis. I'm sure Andrew Brown felt bad about turning a two-run lead into a 5-4 deficit, and perhaps even worse when walking off the mound to a round of boos. Aunt Guthrie was appalled. "That's just terrible, booing a player like that. I'm sure he was doing his best."

Brown got off the hook for the loss in the bottom of the eighth, when the A's tied the score, thanks to a brilliant takeout slide by Jack Hannahan. Frank Thomas was pinch-hitting with the bases loaded and one out, and hit a slow grounder to short. Most batters would beat out the relay throw, but Thomas is so slow, there was a high risk of an inning-ending double play. But Hannahan just obliterated Brian Roberts, who had no chance at making a throw to first to double up Thomas. It reminded me of the collision between Randy Johnson's fastball and the dove. Roberts simply disappeared, so much so that I don't even have a photo of it. One of the best slides I've ever seen, and the game-tying run scored.

So the game went into extra innings, which is a happy result, because nobody can feel too bad about losing in extra innings, right? You both tried your best, and played well, and somebody had to get lucky and win. In this case, it was Mark Ellis who got lucky and won, with a home run that just barely glanced off the foul pole. 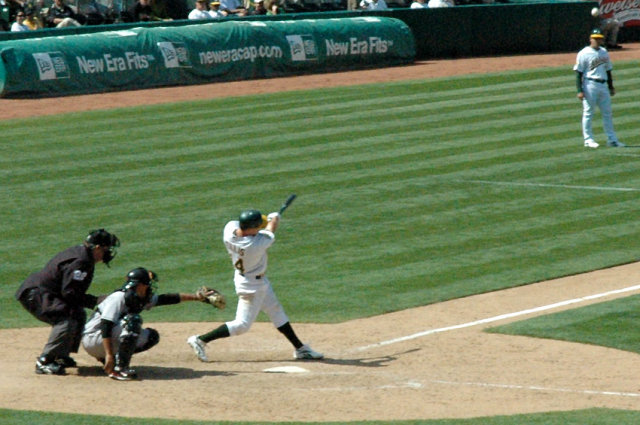 Yay! And now, the A's are once again tied for the best record in the American League. The fellows on this A's team are really good boys, they really are. Hooray for them! Yippee!

Comments
1.   Philip Michaels
I understand that after the game, the A's and the Orioles went to Straw Hat Pizza for root beers and pepperoni slices.

I envy you, Ken. You always wind up sitting next to civilized folk like kindly Aunt Guthrie. Every time I go to a game, I wind up sitting in the middle of a David Mamet play, only without the wit and penetrating insights into humanity.

(Oh gosh, I've been away from California too long if I'm daydreaming about Mountain Mike's now.)

3.   Ken Arneson
Whatever happened to Straw Hat Pizza? They used to be everywhere, and then:

"By the mid-Eighties, Straw Hat Pizza was regarded as the dominant pizza restaurant in the Western United States as the Pizza Hut chain was trying to establish a market presence in the same area. Pizza Hut made a move to eliminate a major stumbling block to its own expansion by purchasing all company owned Straw Hat Pizza restaurants in 1987; thus removing its prevailing competition. Although the company owned Straw Hat restaurants were quickly changed to Pizza Hut locations, Straw Hat's franchise owners refused to participate in the acquisition. The Straw Hat owners would not allow their superior California crust pizza and unique restaurants to be converted. They stuck together and won the right to carry forward the Straw Hat brand as a cooperative organization."

4.   Philip Michaels
3 There's still a Straw Hat Pizza in Pleasanton, across the street from the Pleasanton Softball Complex on Hopyard.

Me, I'm a Round Table partisan, in spite of the horrible ad campaigns I've had to endure on A's radio broadcasts the past few years. Pizza Knight, my foot -- don't make me nostalgic for Matt and Marcus.

5.   Ken Arneson
Mountain Mike's just opened in Alameda last month. It's good, but I still prefer Round Table, too. I can't really remember what Straw Hat pizza tasted like. The one at South Shore shopping center disappeared from Alameda in that 1987 takeover, and I haven't had one since.

Berkeley has so much better pizza than Alameda. Zachary's, Blondie's, Fat Slice, even LaVal's...I ate much much pizza during my college days.

Your ball club consistently amazes. I have no idea how they do it (well, maybe a few ideas), but the A's always impress and usually surprise.

My strongest (bad) memories are of them systematically dismantling (and sweeping) the Red Sox during the Division Series of 1988 and 1990 when I was in college at Amherst. Ugh.

But I am now just so amazed to see that this team perseveres and remains competitive no matter what -- now that I have lived on the left cost for 15 years, I view them as a California institution that should be defended fiercely, maybe even more than Disneyland and the BBQ chicken pizza and maybe even the Grateful Dead.

A tip of the cap to Oakland and its diehard fans -- count me amongst them.