The A's are way too depressing to even think about, let alone write about. Let's just forget them for awhile.

Instead, I want to share my favorite OMG! moment on today's Internets, this blog entry from David Byrne:


Here is a photo from a NY Times article on a Northern California company that specializes in games and content for mobile phones. The CEO and founder of the company, Trip Hawkins (is that a movie name or what?), stands center. Looks like he spends time at the gym — and at personal grooming. 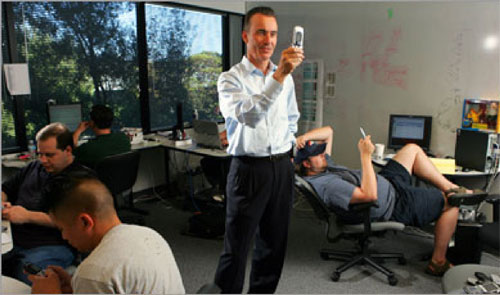 The guys slouched around him — overweight, balding slobs — are the guys who, I presume, do the grunt work in the company. If ever there was an image of animal social hierarchy this is it.

That, my friends, is Silicon Valley in a perfect nutshell. There's a set of Alpha Males, driving around in shiny new BMWs, wearing expensive designer "casual" clothes, discussing all their latest and greatest deals, bragging about their latest round of golf, perfecting their preening to impress anyone who will listen. Then you have a set of out-of-shape dudes in t-shirts and flip-flops who don't have time to play golf, and wouldn't care to if they did, because they're too busy, you know, makin' stuff. The Venn diagrams of these two sets barely touch.

I remember one time I was wearing a 49ers t-shirt with a picture of Ronnie Lott on it. I walked into the CEO's office (in one of those rare moments of Venn diagram intersections), and I think the words that came out of his mouth were, "Oh, Ronnie Lott! I played 18 holes with him yesterday," but the words I heard him say in my brain were, "I am an alpha male. I hang out with alpha males. You, however, can only manage to wear the image of an alpha male. Therefore, you are not an alpha male."

When I get frustrated about the A's, and I don't feel like blogging about them, I think about that moment. Athletes are the alpha males of our popular culture; their status-to-actual-societal-value ratio is way out of proportion. So why the hell do I keep feeding their egos by doing exactly what they want me to do, and obsess about their success?

I really ought to have more dignity than this. I should be an alpha male! I should be the obsessee, not the obsesser! But it'll probably never happen. I'm such a beta male, it's pathetic. And probably, if you're reading this, so are you.

Comments
1.   Cliff Corcoran
Ah, but by being a writer, an "expert" that the rest of us turn to for information and opinions, and beyond that being the mastermind behind this here Toaster thing, you are an alpha beta. In our imaginary Toaster offices, you sit in the big office wearing your Ronnie Lott tee and the rest of us wonder where you got such a cool shirt. "I remember Ronnie Lott," we think "but Ken has the shirt!"

Furthering this psychoalphadiscobetabioaquadoloop, two rows ahead of me in the Yankee bleachers this past sunday was a guy sporting with a spiffy red Lott #42 throwback jersey. I might have gone the whole last year without Ronnie Lott crossing my mind, and now he's everywhere!

2.   sparky
extremely insightful (albeit a little depressing). On the other hand, it is a little satsifying that not everyone aspires to conform to the alpha-male stereotype (i.e., I like wearing flip-flops).

3.   Cliff Corcoran
Another thing that gets me about this is that Trip Hawkins (if that is his real name), looks a bit like David Byrne himself. Indeed, Byrne made his mark in part by dressing like an alpha in a culture dominated by betas (or at least those presenting themselves as betas). Curious that he himself seems to miss that angle.

4.   Bob Timmermann
According to the Million Dollar Database, Trip Hawkins is the chairman of the board of this enterprise.
http://www.digitalchocolate.com/

5.   Ken Arneson
Hawkins is well known in these parts, primarily as the founder of Electronic Arts.

8.   Mr Customer
Hey, that kinda looks like my office, too. Guess which one I'm not.

9.   Kayaker7
Ah, don't worry about it. You'll live longer by being a Beta+ male, rather than Alpha male. I think I read about...I wanna say...chimps or wolves...I can't remember exactly, but high status males mated with more females, had more fights, lived shorter lives, and died a violent death. There were some "beta+" males (for lack of a better term) who were good at conflict resolution, schmoozing with members of different cliques, also had just as many mates (a lot of times they were the females mates of the alpha males looking to diversify the violent genetics of their offspring) and live a lot longer.