"We don't get the guys who are perfect...There has to be something wrong with them for them to get to us."
--Paul DePodesta, in Moneyball

"Give me a name for chance and I am a fool!"
--Rodolfo Tonetti, in The Gay Divorcee 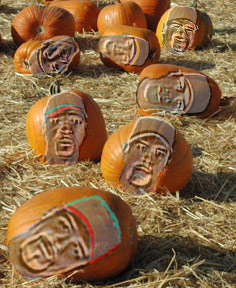 Esteban Loaiza signed with the A's. What's wrong with him?

Like some of Billy Beane's other past pitching acquisitions, such as Mike Fetters, Mike Magnante, Mike Holtz, Mark Redman, Arthur Rhodes, and Jay Witasick before him, there is a clear and definite risk that Esteban Loaiza could turn into a pumpkin at any moment.

This is what both frightens and fascinates me about this signing. Beane is taking an extremely interesting gamble. Fate is a foolish thing to take chances with. It could pay off brilliantly, or it could completely blow up in his face.

To see how, let's start by looking at Loaiza's stats from the last six seasons:

Loaiza induces a lot of ground balls. This plays perfectly into the Oakland's excellent infield defense. Even if they got the mediocre Loaiza of 2000-2002, with DIPS ERAs hovering around 4.50, the A's defense could turn that into an actual ERA under 4.00. Witness the A's rotation in 2005:

The only pitcher on the entire 2005 A's pitching staff (starters and relievers) with a DIPS ERA higher than his actual ERA was Joe Kennedy (4.28 DIPS/4.45 ERA).

The other good thing about Loaiza is that he has rarely been hurt. Health is a useful skill. Although this could change, as Loaiza will turn 34 next month.

With all this information in hand, I can see three scenarios play out:

Which result will the A's get? Who knows? My first reaction was one of bewilderment, but I'm more at peace with the decision now than I was a few hours ago. Fate is the foolish thing. Take a chance!

Comments
1.   jkrometis
I fear that you're giving too little weight to Loaiza's home park this past year. RFK was one of the most run-suppressing parks in the majors last year. His home/road ERA split (2.86 vs. 4.71) was quite large, and not especially inspiring when compared to 2003 (3.32 vs. 2.46).

However, I think it's worth noting that, unlike with John Patterson, the split does not come from obviously park-induced sources (stats are per batter faced):

The decrease in doubles and triples could be park influenced, as could the balls in play figure (though such a large swing is also likely due to luck), but the biggest issues here are the K & BB numbers, and the difference is pretty drastic. So which Loaiza can the A's expect to get in the future?

Perhaps Beane's scouts can give him a better idea than we have, but with the information I have, I wouldn't feel too comfortable with him at $7M per year. Either way, I doubt he finishes the deal in Oakland. But maybe this is rotation insurance in preparation for shedding a starter in the near future. And we all know who that might be...

P.S. Are there two teams less likely to be bidding for the same player than the A's and Giants?