I got to watch Bonds hit his 714th homer on TV just before we had to leave the house for my daughter's 2:30pm softball game.

I thought it was a extraordinary thing. Not so much the home run, but the fans' reaction to it in the Oakland Coliseum. Bonds has been booed pretty consistently at the Coliseum over the years. Every time he steps to the plate, or his name is announced, the boos rain down from the stands. Even moreso recently.

And yet, when Bonds hit #714, it seemed like everyone in the house, A's and Giants fans alike, gave him a standing ovation so long he had to take three curtain calls. It was as if the A's fans were saying, OK, we don't much care for you, Barry, but we respect your accomplishment. We respect the number.

How remarkably civilized. It was as if 35,000 people suddenly remembered their manners, the lessons they were taught as children. 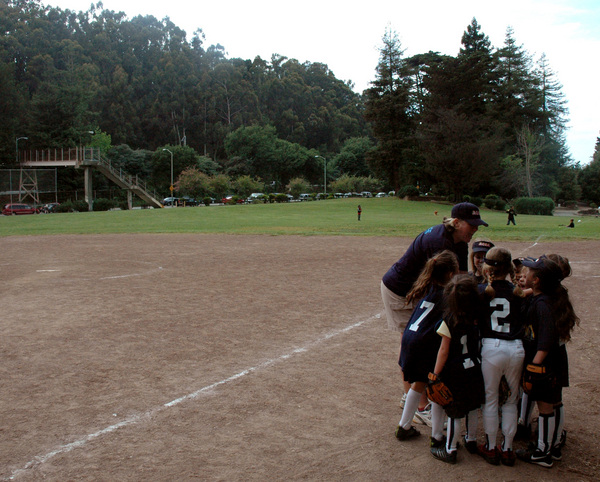 Play hard, play to win, but always respect, appreciate, and thank your opponents. The world is a better place when you do.

Comments
1.   sam2175
I think genuine baseball fans owe people at the Coliseum a big thanks. After the Astros fans gave Russ Springer a standing ovation for pitching desperately inside to and eventually plunking Bonds, I thought things have hit a new low. More than Barry's astonishing accomplishment, I was positively surprised by the reaction of the Oakland A's fans. Truly a magnanimous and great gesture.

3.   Bob Timmermann
Dodgers fans cheered Tim Hamulack after he got ejected for hitting Bonds with a pitch.

But we have issues with Bonds and the Giants.

4.   underdog
And here I thought we were cheering because Hamulack was leaving?

And yes, kudos to the A's fans - though outclassing Houston fans doesn't take a whole lot of effort, it's still nice to see them rise above the temptation.