This is a truly cosmic convergence of events. It's like all the planets lining up in a row. The most popular sporting event, the most beloved children's character, and the most fantastically awesome blogger in the world, all celebrating the same number birthday on the very same day, for the very first time EVER!

I must say, I'm quite disappointed that somebody over at Disney or some other large advertiser hasn't yet seen fit to take advantage of this wonderful opportunity to fly Mr. Pooh and me down to Miami, and provide us with Super Bowl tickets, so that the three of us can celebrate our XLIst birthday together, just as Destiny obviously intends. It's a great story, and would make a great promotion.

Something magical is meant to happen there, to the three of us. And we shall be rooting for the Bears. OF COURSE the Bears are in this Super Bowl--how could they not have been? Winnie-the-Pooh is a bear. And I graduated from UC Berkeley, so I'm a Bear, too. In fact Pooh and I are both Golden Bears of sorts. So isn't it appropriate that the Bears win Gold in this Super Bowl?

I know somebody at ESPN.com will read this. Send it up your chain of command. It's gotta happen. You know it. Make it happen. Or maybe some wealthy Chicago Bears diehard wants to hedge his bets. You KNOW if Pooh and I are there, the Bears HAVE to win the game, with some kind of incredible ending. How could it be any other way?

Otherwise, I'll probably just hang around home, popping Doritos while I watch some boring 48-7 Colts blowout victory, on my nothing-special 20" TV, eating an ordinary birthday cake and opening a few presents, all of which is certainly nice, but also not magical.

And just to show how incredibly incredible this cosmic convergence of events is, guess what? Baseball Toaster's 2006 Photo Outtake series has reached photo #XLI: 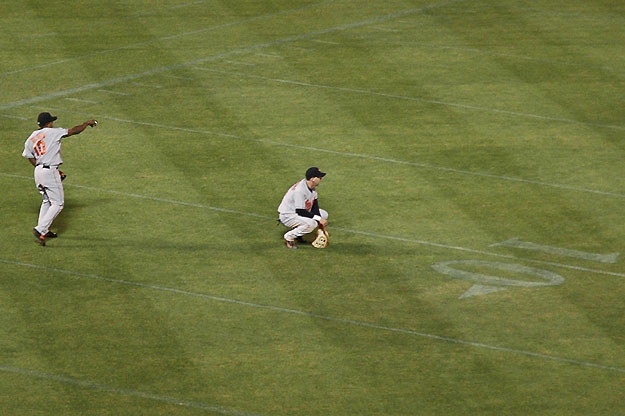 And can you believe it? It just happens to be a picture of baseball players on a football field. The odds of all these things happening together are simply astronomical.

There is a chance that these events could converge again in 2018, the next time February 4 falls on a Sunday. But do we really want to wait another eleven years for this opportunity? Do we really want to trust the NFL not to push the Super Bowl out another week a decade from now? That the Bears will be in that Super Bowl, too? Do you really want a boring Colts blowout, CBS? I think not. Pepsi, Nike, Toyota--do you want as many people as possible to see your ads in an exciting game? Prove it! Me, Pooh, and the Super Bowl. We must meet. This chance may never come again. XLI, baby! Just do it!

2.   Ken Arneson
1 That's what they get for trying to resist Fate.

Tomorrow, they may wake up, and find themselves living their day of hell over and over again, until they finally figure out how to give Destiny what it wants.

4.   Linkmeister
Unlike Pooh, I hope, you're not a bear of little brain.

5.   Philip Michaels
According to our friends at Wikipedia, February 4 is also the liturgical feast of Saint Veronica... the patron saint of photographers.

However if you are watching the Super Bowl in your area on Station #6, there would be even more fate!

9.   Ken Arneson
8 Since nobody has come forward and provided me tickets to Miami and the game, I agree with you. The Bears only have themselves to blame.