Chapter 1: How to recognize a very good pitcher from a very long ways away indeed

Dan Haren has been the best pitcher in baseball so far this year, but he didn't have his best stuff today. He's a pitcher who is always around the plate, pounding the strike zone, throwing strike after strike. But on this afternoon, his location was off, he was throwing more balls than usual, running long counts, throwing 24 pitches in the first inning, and reaching 75 pitches after four. Although the Rangers had only managed one run off Haren early in the game, and his opposing pitcher, John Koronka looked very very hittable, I began to worry that the A's might lose this game in the end. Haren looked like he would hit his pitch limit shortly after five innings, the A's would need three-to-four innings of work out of their quite shaky bullpen to win the game. But then, the field tilted. 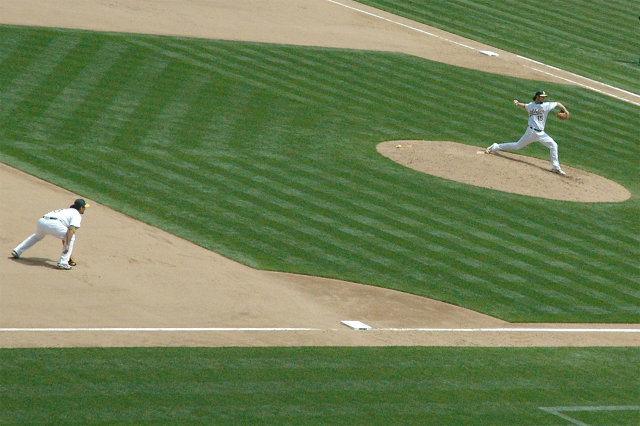 It happened in the fifth inning. What had been an uphill struggle for four innings, suddenly reached a peak and started racing effortlessly along like the cake of Gloucestershire cheese in today's scoreboard highlight of choice. A five-pitch inning was followed by a seven-pitch inning, and the next thing you knew, Haren had stretched his one last inning to three, and ended the day with eight innings pitched and only one run allowed.

And that's how to recognize a good pitcher. When he starts the game with an ERA below 2.00, has a bad day, and still manages to lower his ERA after the day is over: that's when you have a very very good pitcher indeed.

Chapter 2: A long ways away 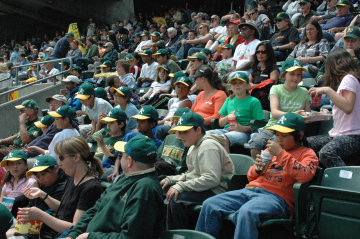 I didn't sit in my customary seats behind first base today, as I was chaperoning my kids's fourth-grade class on a field trip to the game. We were up in the second deck behind the A's bullpen. It was hard to see balls and strikes from there, making it difficult to discern what happened to Haren between the fourth and fifth innings that changed directions for him. On the other hand, I did get a good look at Milton Bradley's first appearance in the outfield in a very long time. Bradley looked good patrolling center field, and hit the ball hard at the plate, as well. 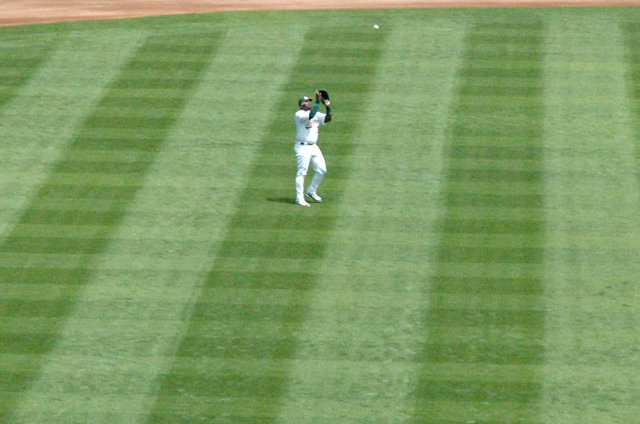 I could easily get used to having Bradley in the lineup again. The thing I like best about it today was that it helped push Eric Chavez, who it seems may never be fully healthy again, down to the sixth slot in the lineup. If you judge by WPA, Chavez has been the worst player on the team this year, more damaging, believe it or not, than Jason Kendall, because Chavez has been killing rallies all year in the middle of the lineup, whereas Kendall's ineptitude has been at least minimized by batting ninth.

One thing I will never get used to, however, is watching Dan Johnson hit triples. He hit his second career triple today, driving in the A's first two runs. It helped, of course, that the ball hit the base of the right-field wall and bounced off at an unusual angle and speed, which in turn caused the right fielder to fall down. But the best part about sitting up with the kids today was having this view of Johnson's comically inelegant flop into third base: 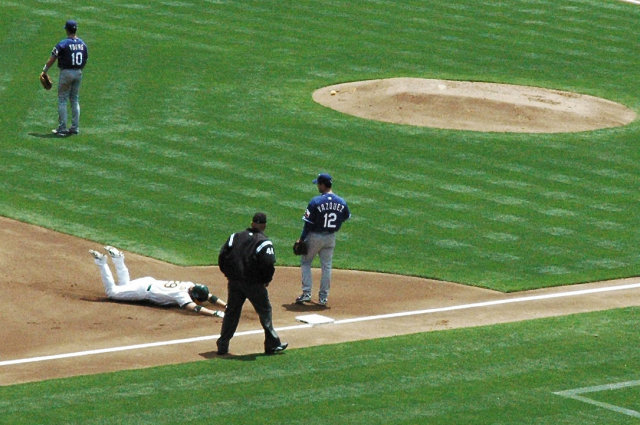 Don't try this at home, kids.

The A's honored four African-American 20-game winners before the game, in connection with Jim "Mudcat" Grant's new book, Black Aces. Grant, Vida Blue, Mike Norris, and Dave Stewart were honored before the game. And after the ceremonial first pitch, there was only one thing left to say: 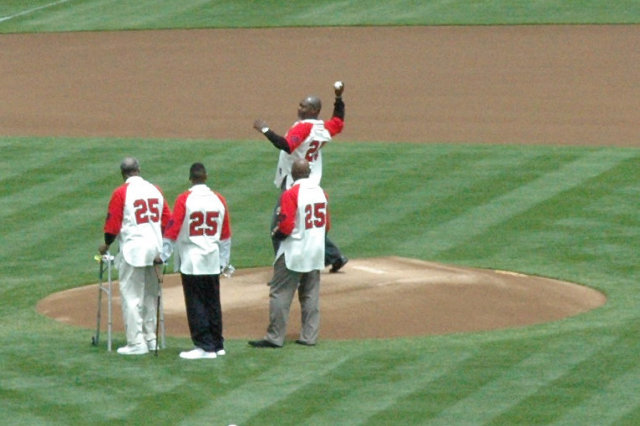 2.   Bluebleeder87
Stewart still has nice form out there

3.   Ken Arneson
2 His pitch (thrown to Milton Bradley, BTW) was way high and outside. I think his stride was too short, causing him to get under the ball.

4.   Bluebleeder87
well at least he had a good cheering section with the other BLACK ACES, i wonder what they we're telling him.

5.   Bob Timmermann
Does Grant have to use a walker now?

6.   Ken Arneson
5 Apparently so. And Mike Norris uses a cane.