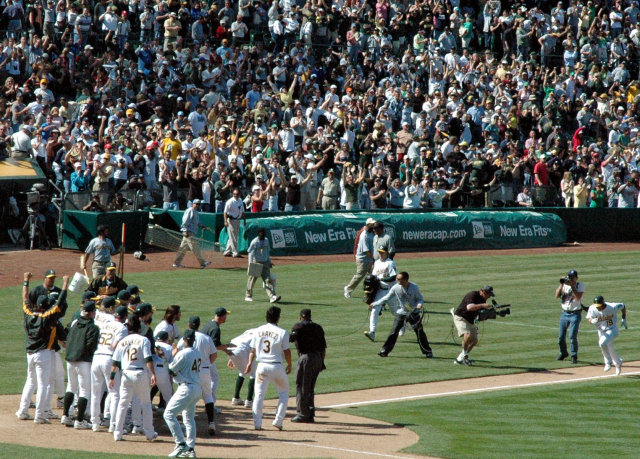 Without a doubt, the highlight of the 2007 season for the A's came on April 15, when Marco Scutaro hit a two-strike, two-out, walk-off home run in the bottom of the ninth off Mariano Rivera. Playing primarily as a backup utility infielder his whole career, he nonetheless has managed eight career walk-off hits. Those timely hits, combined with his six RBI in the 2006 ALDS, has given Scutaro a solid reputation as a clutch hitter.

Today, A's GM Billy Beane traded Scutaro to the Toronto Blue Jays for two minor-league pitchers. This alone probably shouldn't be taken as a signal that Beane has decided to blow the team up and rebuild. Scutaro (.693 OPS in 2007) is arbitration eligible, and Donnie Murphy (.731 OPS) emerged last season as a cheaper version of Scutaro, someone who can play multiple infield positions and provide some tolerable offense along with it.

In return, the A's receive two unheralded A-ball pitchers, Graham Godfrey and Kristian Bell. Both were low round draft picks who had some middling success this year. Neither one strikes out a lot of batters. Godfrey (3.98 ERA, 6.02 K/9) has a "a low nineties fastball, a slider and a change-up" according to Batter's Box. Bell, oddly, had matching mediocre earned run and strikeout rates this year, (5.33 ERA, 5.33 K/9). This is especially odd considering that Bell is apparently capable of throwing lightning bolts at will.

2.   JL25and3
His name is actually Italian for Mark Scooter.

3.   Jon Weisman
So now we know what Kristian Bell will be doing after her run on Heroes ends.

4.   joejoejoe
You probably already know this but Marco Scutaro is in an excellent documentary about minor league baseball called 'A Player to be Named Later'. He and his wife are very likeable in the documentary and I recommend the film to all baseball fans and specifically fans of Marco Scutaro. To see the guy in the bigs year after year is a treat after seeing him living in a tiny apartment with his wife struggling to find Venezuelan food at the local market.

5.   letmegorocknroll
half the fun of going to an A's game was shouting "MARCO!" and having a bunch of people reply with a "SCUTARO!"

Scutaro produced the only thing I'll remember about the disappointing A's 2006-2007 season. Hope he does well in Toronto.