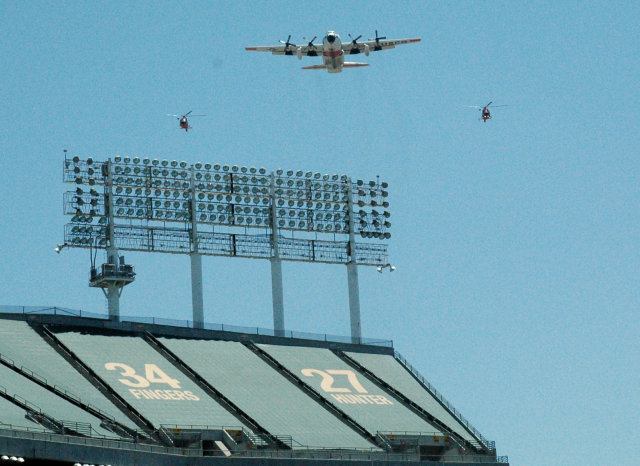 David O'Brien of the Atlanta Journal-Constitution says he has spoken with Mark Kotsay, who was told by Billy Beane that the A's are working on a deal that would send Kotsay to the Braves for a mid-level prospect. The A's would probably pay at least $5M of the $8M owed to Kotsay this year. If the Braves find Kotsay's MRI acceptable, the deal could be announced Monday.

This deal is probably going down now because the Braves other good CF option, free agent Mike Cameron, just signed with the Brewers. It's a good fit for both teams: the Braves need a stopgap centerfielder until Jordan Schafer is ready for the big leagues, and the A's need minor league depth.

I feel about this news exactly as I felt about the Jason Kendall trade: to get anything of value for Kotsay at this point, including salary relief, is a great move. A healthy Kotsay was one of my favorite A's players ever: I loved his deadly accurate throws, and I liked watching his simple approach at the plate: swing at anything that's a strike, don't swing at anything that's a ball. But it's time to move on. Kotsay, in the last year of his contract on a rebuilding team, most likely isn't going to help the A's win any pennants, even if he stays completely healthy in 2008. If the deal goes through, I'll be happy. If the A's get back anybody who's a top 20 Braves prospect, I'll be giddy.

Update:  The A's have signed free agent outfielder Emil Brown to a one-year deal to play the Bobby Kielty role of right-handed platoon bat.  Danny Putnam was designated for assignment to make room for Brown on the 40-man roster.  Which suggests something else:  the player the A's will get back for Kotsay is probably on the Braves 40-man roster.  Because if the A's were getting a player back for Kotsay who wasn't on the 40-man roster, the A's would probably just wait to finalize the Brown deal after the Kotsay trade goes through, give Kotsay's roster spot to Brown, and not have to risk losing Putnam on waivers.

The only players who are both on the 40-man roster and on John Sickels' top 20 Braves prospect list are #3 Brandon Jones, #5 Joey Devine, and #9 Jair Jurjjens.  Any of those sound too good to be true, so it's probably not a top-20 prospect coming back.

Update 2: ESPN confirms that the A's will get Joey Devine for Kotsay. The A's are eating all but $2M of Kotsay's salary. That's great for the A's; they're shedding salaries commitments left and right, and have budget room to absorb some salary to get some talent back. Devine, a reliever, is a former first round pick who has huge strikeout rates, but also high walk rates, too. He showed some signs of improving his control in 2007. The A's want upside these days, and Devine certainly has that. His walk rates may prevent him from realizing his full potential, but even if he flops, this is a great deal for the A's.

Not saying there's anything wrong with trading Kotsay, getting anything decent for him will be a win, but just sayin'...

Perhaps it's better to say that what the A's are looking for right now is "upside".

3.   Humma Kavula
If the Braves need a center fielder, I would point out that Juan Pierre is available.

And I bet the A's do get someone in the Braves top 10 prospects. Of course, after the traded about a third of last year's top 10 list to Texas, I'm not sure whether that means what it once did, but...

7.   Ken Arneson
3 You know though, that after all these deals go down, the A's will probably have cleared about $30-40 million or so of present and future salaries out of their budget. They could probably make a deal where they say something like, take Alan Embree, send us McDonald and DeWitt, and we'll take Pierre's salary off your books.

8.   Vishal
7 but it's not the salary that we care about; we'll give him away for free. we just want him off our roster.

9.   Ken Arneson
8 Remind me not to hire you as my accountant.

10.   paranoidandroid
Wouldn't it be so totally ironic if Billy "Moneyball" Beane took on Juan Pierre?

We took Loaiza and his salary, wouldn't it fair to take something in return?

11.   Jason Wojciechowski
I would hope that if the A's are sending $5M in cash to cover over half of Kotsay's salary, they'd get something better back than a random relief pitcher on the 40-man. Isn't that how deals work now? If you don't send cash, you get filler back (like an A-ball reliever), but if you send cash, you get actual players?

But I guess Ken's probably right: even clearing $3M off the books, especially considering Kotsay won't be on the Fremont A's, is valuable. And of course, the Braves know that.

12.   Ken Arneson
The SF Chronicle says the A's are asking for Joey Devine. Getting a young potential closer like Devine would make it easier for the A's to trade Huston Street.

Devine is only a month younger than Street, but he has accumulated far less service time. He has great stuff, but has struggled with control.

13.   jmoney
I'm not terribly optimistic about Devine (isn't he the one that got called up way too fast a couple of years ago and gave up like 10 grand slams?), but he's still way more than I thought the A's would ever get for Kotsay. Good show, Billy Beane.

14.   Mac Thomason
Bobby Cox hates Devine, apparently, and buried him when he was called up last year even when the bullpen was struggling.

Vishal, I wouldn't have taken this guy for free. I can't tell you how much I hate this deal. Congratulations.

15.   Vishal
9 hahah, if it were MY team i'd probably feel differently. as a fan, i don't really care. from my perspective the dodgers can afford to treat the pierre contract as a sunk cost. if i were colletti i'd want to get SOMETHING back in return if i could though, obviously.

devine for kotsay sounds like a great deal for the A's.

16.   das411
Has Devine ever fully recovered from giving up the Chris Burke Homer in that awesome 18 inning game in 2005?

17.   JoeyP
This is a good trade bc Kotsay is terrible at this stage of his career.

A's get back someone with upside.

Much much better deal than that Swisher stinker.