The other day, Philip wrote, regarding the 2006 A's, that "this has easily been, for me, the most maddening team to follow. Hardly are those words out than I find myself moving from lacking all conviction one minute to a quiet confidence the next, and then right back again.

My unstable emotional state is probably a sign that I don't really understand this team very well. I cannot forecast to you the action of Oakland. It is a riddle wrapped in a mystery inside an enigma.

I don't mind having an unsolved mystery or two, like the tagline of this very blog, Stop Casting Porosity, lurking in my life. But when too many unsolved mysteries begin to accumulate, the riddles start turning and turning in my mind, as my mind tries to bind the disparate enigmas together into one impossible story, like a shape with lion body and the head of a man. I become vexed; there is too much data to control; the circles turn wider and wider; the center cannot hold. Questions become obsessions becomes paranoia. Anarchy is loosed upon my mind.

There's something's happening here. What is, ain't exactly clear. You've got to be a very wary bear. Stop, listen, what's that clown, everybody look what's going down:

I wrote this blog entry once before. But just before I was about to save it, my editing window vanished, and everything I had written disappeared. I gazed blankly at my screen. When something dies, you expect a shadow: some sign of the departed, desert birds circling indignantly for their meal. But nothing. No other computer problems; my other windows stayed intact. Just the one window with my first draft disappeared. How perfectly...inconvenient.

Was there something I wrote in my first draft that somebody didn't want publicized?

Let's say there's a product you think you'd like to buy. The product comes in a set. You might want the whole set, but more likely, you'd only want a few pieces of the set. A piece costs about $50-$200, depending on the quality of the individual piece. The set costs about $1,200. Here are the terms that the manufacturer offers you:

Would you purchase the product, or try to renegotiate the terms?

I feel compelled to reject the deal, just on principle. However, it turns out the manufacturer can sell out the product anyway, despite the ridiculous terms.

There are two mysteries: 1. Why do so many people accept these terms? Do people lack all conviction? Are they so full of passionate intensity, they will pay anything, on any terms, to join the ceremony? 2. Given this troubling deal, is there any way to beat this racket?

I have no answer for either question.

For a whole week earlier this month, two or three times a day, a convoy of eight or so SUVs and minivans, all with Michigan license plates, kept driving past my office. About one or two minutes later, the entire convoy would turn around and drive away in the other direction.

Where were they going? There isn't really much at the end of my road except a dumpster, a turnabout, a tennis court, and a boat dock. Why did they come all the way from Michigan to California? Why wasn't one car enough? Why did all of these cars need to travel together? There wasn't really enough time for them to load or unload much cargo and turn right around. What in the name of Bo Schembechler is going on here?

Dude, Who Stole My Car?

As darkness dropped on Wednesday evening, I lay in a stony sleep, nursing an injured neck, when my wife awakened me to a nightmare: some pitiless thief had just stolen my car from in front of my house.

This is the second time this car has been stolen. Were they looking for something in my car? Did the Michiganders have anything to do with it? Was Scott Brosius involved?

The Return of Scott Brosius 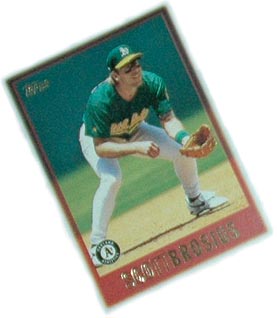 Some weeks earlier, I arrived home one night, went into my kitchen, and flipped on the light. Right in the middle of the floor, I found a 1997 Topps Scott Brosius baseball card.

Where did the card come from? Who put it there? Is it a warning? An omen?

This image from the past troubles my sight. In my eyes, if Scott Brosius is a symbol for anything, it's the lost sheep, the prodigal son. Brosius left the A's after a miserable 1997 season, and went to the Yankees, where he became a postseason hero. In fact, Brosius' departure began an incredible run where nearly every World Series featured someone who had done practically nothing in Oakland, but seeming out of nowhere became a postseason hero in their new homes:

FWIW, here is a list of players who match the above criteria, who are eligible for the postseason:

Will it happen again? Is one of those players on this list the next ex-Athletic to earn postseason glory?

Or does the second coming of Scott Brosius mean something else? Is some new revelation is at hand? Is there some great Spirit of Baseball loosing a strange new tide upon the world? What rough beast, its hour come round at last, slouches towards Oakland to be born?

And The Last Puzzle Piece...

Comments
1.   Vishal
ken, i love the way your mind works. it's endearing as hell.

4.   Schteeve
The call is coming from inside the house!

5.   al bundy
If Bonderman qualifies, what about young Andre Ethier?

7.   BlueMamma
as always, a thrilling read. a missing car, an unbeatable racket, a mysterious convoy from michigan and scott brosius. and a man on a grassy knoll...

8.   das411
Isn't there some NL manager that had a couple of good years in Oaktown too Ken?

9.   Ken Arneson
Yeah, but managers are never heroes, they can only be goats.

10.   Philip Michaels
9 Not to quibble with The Guy Who Lets Me Post Stuff Here, but I submit as counter-argument Jack McKeon. In 2003, he was the cigar-chomping Old Timer who could talk to the young, whose unconventional decision to start Josh Beckett in Game Six single-handedly unnerved the Mighty New York Yankees and whose ancient homespun wisdom inspired his charges to victory.

I may be engaging in hyperbole there. But nevertheless, the fact that McKeon was lauded as some kind of SuperGenius post-2003 series is indisputable. (And, of course, if Beckett lays an egg, then McKeon is rooming with Dusy Baker in a spacious condo on Dumb Manager Avenue.)

I also seem to recall Joe Torre being hailed for his calm, steady hand in the 1996 World Series -- heck, he even got a made-for-TV movie out of the deal with Paul Sorvino starring as Joe Torre -- though the details of that have faded with age.

My point: it's rare, but occasionally a manager will break on through to hero status in the post-season.

11.   ToyCannon
How does Jason Giambi meet the criteria since he did have what you might call decent years in Oakland?

Hopefully the Dodgers can expect Saenz and Ethier to continue this tradition.

Which leads to: 10,13 Point taken. However, I'm too lazy to look up all the coaching staffs to find all the ex-Athletics.